India will compete in the Olympics for the 25th time in Tokyo, which will take place from July 23 to August 8. The Indian contingent for the Tokyo Olympics will consist of their largest team ever, with 126 athletes competing in 18 sports

India hopes that its Olympians will offer delight to a country that has been devastated by Covid-19’s second wave this year. After a somewhat dismal performance in the Rio Olympics, with just two medals and no gold, the Indian Olympians would be anxious about reversing their fortunes and securing a solid podium finish.

In the year 2021, India expects a stronger performance from its athletes, and many of them are in great shape as they prepare for the event. On that note, let’s take a look at the top five Indian athletes who can win a medal at the Tokyo Olympics 2020.

Five Indian athletes who can shine at Tokyo Olympics

Vinesh Phogat will be rated number one in the world heading into the Tokyo Olympics, having advanced for her second Olympics. This season, she has been in outstanding form, earning gold medals in all of the competitions in which she has competed.

Vinesh will also be the top seed in the women’s 53kg weight class at the Olympics, which might help her earn some advantageous pairings in the preliminary stages.

PV Sindhu is among India’s top medal prospects. Sindhu, who earned a silver medal in the Rio Olympics, is attempting to become only the second athlete in history to win two individual Olympic medals. She played the All England semi-final earlier this year, but she hasn’t won a tour event since winning the world championship in 2019.

However, Sindhu who likes to surge at the major stages cannot be ruled out. She is seeded sixth in the Games and has a favorable assignment until the quarter-final round.

Mary Kom, the only Indian female boxer to have won an Olympic medal, is a national treasure. She has a long list of podium finishes under her belt and will be hoping to change the color of her Olympic medal from brown to gold when she competes in Tokyo.

Mary Kom will begin the Olympics as the world number seven in the women’s 51kg weight class, and she will undoubtedly be a player to watch out for at the Tokyo Games. It will be a difficult challenge for her, but her expertise will aid her in reaching the finals of the women’s 51kg division.

Manu Bhaker, the teenage pistol shooter from the state of Haryana, is likely to emerge with a medal. Her victories in the Asian Games and the ISSF World Cups in 2018 have attracted international notice.

When she takes to the shooting platform in Tokyo, she will become just the second Indian to participate in three separate events at the same Olympics. Manu Bhaker will compete in the Women’s 10m air Pistol, Mixed 10m air Pistol, and Women’s 25m Pistol at the Games.

Deepika Kumari won three gold medals in one day at the World Cup Stage 3 last month in Paris. In addition, she has been in incredible rhythm this year, winning two individual gold medals at the Archery World Cup in Guatemala.

Deepika will be the world’s top female archer going into the Olympics as a result of her performance. She is considered a strong candidate in both the solo and mixed team competitions.

Also Read : Tokyo Olympics: 5 Men to Watch Out for the All-Around Title in Gymnastics 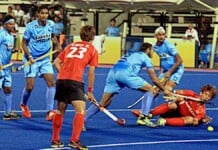