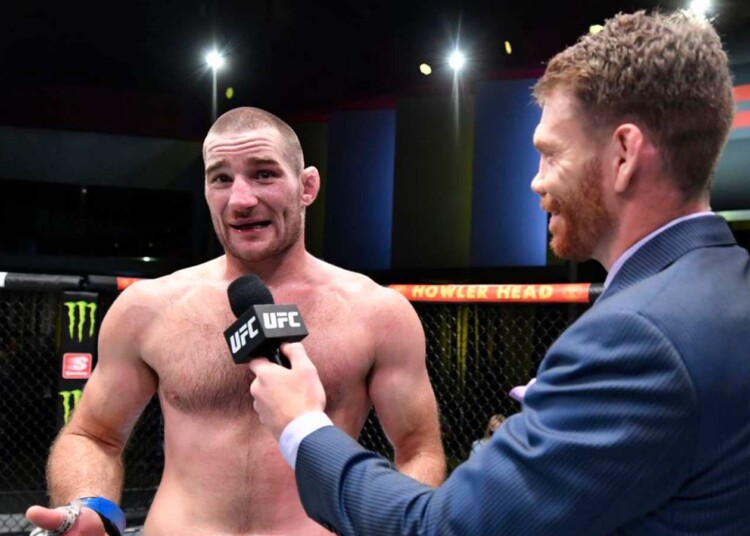 Sean Strickland wants to waste no time bouncing back from his upset in 2022. The top-ranked middleweight fighter is ready to step in on late notice for Kelvin Gastelum at UFC Vegas 67. The promotion is forced to pull strings to keep the first main event of the year alive.

The fan-favorite Sean Strickland was there to sign off UFC events for the year 2022. He will also be there this weekend to headline the promotion’s first fight night since the holidays. Kelvin Gastelum, who was booked to fight Nassourdine Imavov has pulled out of the UFC Vegas 67 headliner bout.

The 13th-ranked middleweight was forced to forfeit his fight owing to a mouth injury. Gastelum took to his social media to apologize to his opponent and fans for pulling out. Strickland, being the wild man he is, has agreed to fight the rising middleweight, Imavov to keep UFC’s first main event of 2023 alive.

Sean Strickland is coming off a loss against former title contender Jared Cannonier in last year’s final main event. “Tarzan” was unhappy with the judge’s decision and expressed his displeasure last year. He is coming back into the octagon to bounce back from that defeat this weekend. The fight is also set to take place at 205 lbs instead of a middleweight.

Kelvin Gastelum addresses fans after pulling out of the fight

After ESPN broke the unfortunate news for UFC Vegas 67, Kelvin Gastelum himself wrote out a tweet to his fans confirming his injury. “I’m extremely disappointed to say the least. This is not how I wanted to start 2023. I worked my a** off & battled through a lot of adversary and was ready to put on a hell of a show this weekend. I apologize to Imavov, his camp, as well as UFC and all fans,” wrote Gastelum.

I’m extremely disappointed to say the least. This not how I wanted to start 2023.
I worked my ass off & battled through a lot of adversary and was ready to put on a hell of a show this weekend.
I apologize to Imavov, his camp as well as @ufc and all the fans. #OnAmission4Gold

Gastelum was coming off a two-fight losing streak and was desperate to bounce back into the win column. The fighter also went on to post a graphic video of the doctors operating his mouth on his Twitter account.

Gastelum’s journey in the UFC has been very unfortunate. The fighter came very close to becoming the interim middleweight champion against Israel Adesanya. Since then he has only managed to win once against 5 different opponents. Fans still can expect entertainment at UFC Vegas 67 as Sean Strickland grills the journalists on media day.