Patrick Mahomes has a score to settle against Bengals quarterback Joe Burrow and has the perfect opportunity to do so in the AFC Conference championship game this weekend. 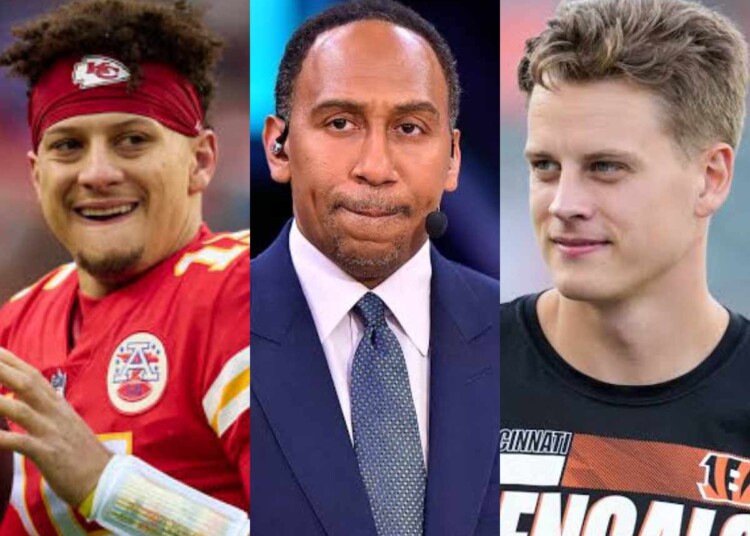 Patrick Mahomes, Stephen A. Smith and Joe Burrow (via Twitter)

The NFL 2022/23 season is nearing its business end with only four teams remaining in the hunt for the much coveted Super Bowl title. The Kansas City Chiefs will take on the Cincinnati Bengals in the AFC Conference championship in what will be a battle between two of the best quarterbacks in the NFL.

Chiefs quarterback Patrick Mahomes and Bengals QB Joe Burrow are arguably two of the best in the business and have put on a stellar show throughout the season. Both have been nominated for the NFL MVP award, and the fixture has been hyped up as personal duel between the two.

Mahomes led the Chiefs to a 14-3 finish in the regular season, while also securing the No.1 seed in the AFC division. The 27-year-old has already won a Super Bowl and has made it into the fifth consecutive AFC title game this year.

On the other hand, Joe Burrow championed the Bengals to the AFC North title, with a 12-4 regular season record. He has defeated fellow NFL MVP nominee, Josh Allen of the Buffalo Bills in the divisional round playoffs and is on the verge of making it into the Super Bowl for a second year running.

Read Further: “Where was this aggression on the field” – Shaq Lawson castrated on social media for criticising Bengals’ Eli Apple’s controversial tweet

Burrow also has the edge over Mahomes, as he defeated him last year at this very particular stage before going onto lose the Super Bowl against the Rams. Due to this particular reason, NFL analyst, Stephen A. Smith believes the upcoming clash is an extremely crucial one for the Chiefs quarterback to cement his status as the best quarterback of the current generation.

Stephen A. Smith warns Patrick Mahomes ahead of his clash with Joe Burrow

Smith spoke about how Burrow has earned the bragging rights over Mahomes so far, and the narrative will completely change if the Bengals grabs the title this year as well.

Smith said, “I’ll make this very simple. It’s great that we talk about Mahomes knowing how phenomenal he is. We cannot escape the fact, that the reigning defending AFC Champions, a quarterback by the guy named Joe Burrow, who has beaten Patrick Mahomes every single time he’s faced.”

“You win again against Patrick Mahomes back to back AFC championship games, you take him out. The conversation changes about Mahomes. We now have to talk about Burrow instead of Mahomes in that regard. We know Mahomes is great, he is phenomenal but we going to talk about him a bit differently.”

The result of this encounter will in all probability decide who wins the NFL MVP award for the current season. With so much already on the line, the underlying personal agendas will simply add on to the magnitude of the playoff clash.