‘He cheats at the highest level’, Donald Trump comes under the radar for falsely claiming golf victory in a tournament 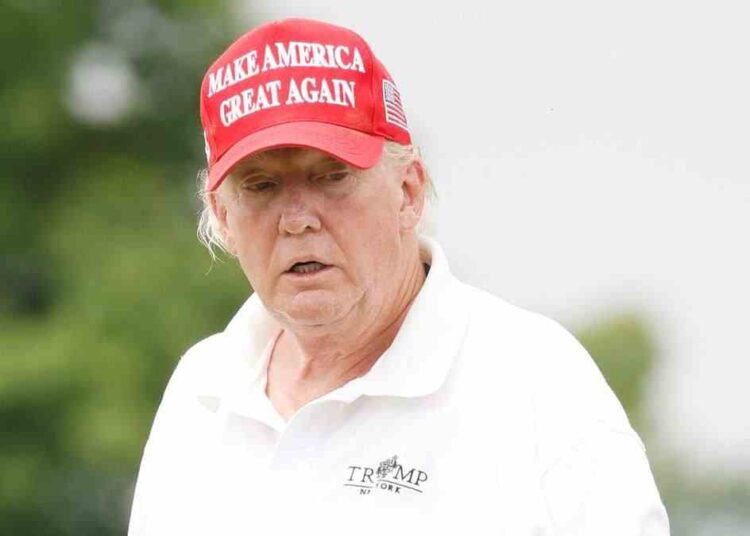 People in the golfing community must have surely noticed former President Donald Trump’s interest in golf. The former President of the United States is so fond of the sport that he even claims tournament victories where he hasn’t participated. Recently, news has been doing rounds that Donald Trump is claiming credit for a club championship despite not competing with everyone else in the tournament.

The former President writes on his own social media website Truth Social which he opened after his Presidential defeat against Democrat candidate Joe Biden. Trump further adds, “Competed against many fine golfers, and was hitting the ball long and straight. The reason that I announce this on fabulous TRUTH is that, in a very real way, it serves as a physical exam, only MUCH tougher. You need strength and stamina to WIN, & I have strength & stamina – most others don’t. You also need strength & stamina to GOVERN!”

The other competitors at the tournament were shocked when they saw Trump’s name at the top of the leaderboard, with 5 points clear from the actual table leader of the tournament. Daily Mail reports that Trump was attending the funeral of North Carolina-based vlogger Diamond over the weekend. There, he complained about the funeral ceremony running too long.

Related: ”They should be educated”, Phil Mikelson and other golfers’ involvement in Saudi Arabia-backed LIV Golf sparks fresh political debate over sports

Donald Trump, former President of the United States, can do marvelous things that shock every onlooker. One of them is to win an ongoing golf tournament without even swinging the golf club. He emerged at the top of the leaderboard at Trump International Golf Club in Palm Springs.

As Daily Mail writes in its report, Trump was five points ahead of the overnight leader on the leaderboard, with his name on the top on day 2 of the tournament. This might not have shocked the competitors, but it has them surprised. As per reports, Trump had shot some good rounds on Thursday at the golf course. The counting of the leaderboard holds this round, wherein Trump had a score of 40 using the Stableford method. This gives one point for a bogey, two for par, and three for a birdie. However, these points magically increased by five to the top on the final day.

This moment could be an uncanny reference to Sasha Baron Cohen’s movie ‘The Dictator.’ In the movie, Admiral General Alladin of Wadiya declares himself the winner of the Wadiyan Olympics and seven Wadiyan Golden Globe awards. At the same time, these scenes were made entirely as a joke. Trump’s recent actions seem to be pointing in a direction that is both embarrassing and amusing at the same time.

Sportswriter Rick Reily, who has written the book ‘Commander in Cheat: How Golf Explains Trump’ has compared Trump’s cheating skills to Michael Phelps’ swimming. The book, which was released in 2019, says, “He cheats at the highest level. He cheats when people are watching and he cheats when they aren’t. He cheats whether you like it or not. He cheats because that’s how he plays golf … if you’re playing golf with him, he’s going to cheat.”

While everyone seems to despise LIV Golf at the international level, Trump has come out as an ally to the rebel golf circuit. The former President has allowed the circuit to conduct events at his golf course and was also seen at some of their events last season.

Trump’s sportsperson has refused to comment on this incident to the media.