by Arpan Ghosh
in Everton, Football 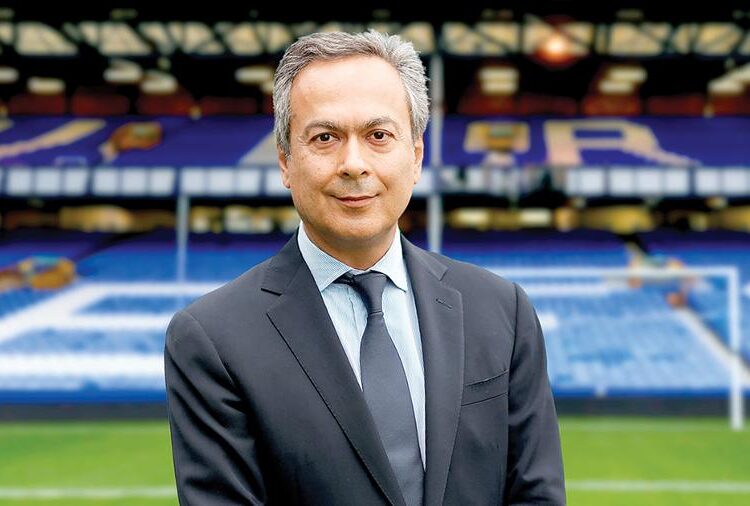 In a dramatic development, Farhad Moshiri has put Everton Football Club on sale, according to a report by Guardian on Tuesday. The British-Italian businessman is looking to sell a minority or majority stake in the club and is looking for offers upwards of 500 million pound-sterling. The club, currently battling relegation, sacked its manager Frank Lampard earlier this week. A complete upheaval in management might finally give the club a new lease of life.

Moshiri bought the club back in 2016, paying 270 million GBP for minority ownership. 7 years and 670 million GBP of influx later, Moshiri is currently the owner of 94% of the club. The former chairman of USM group, Moshiri has also commissioned a new stadium at Bramley-Moore Dock. US-based finance firm Deloitte is handling the paperwork.

It has been a tough start to 2023 for Moshiri who had to step down from his role in the USM Group in the wake of Russia’s invasion of Ukraine. The USM Group, owned by a Russian oligarch, Alisher Usmanov, is facing sanctions by the EU and Moshiri stepping down, is believed to be linked with the same issue.

According to people close to the matter, the USM group was also going to hold the naming rights of the newly built 52,000-seater ground which was slated to open before the 24/25 season. Moshiri also suffered a double blow after Marcelo Bielsa rejected his board’s offer to join the club and Tottenham Hotspurs hijacked their transfer target Arnaut Danjuma.

American billionaire, Maciek Kaminski, had been in talks with the club since last summer but Moshiri maintained that the club is not going to be sold. Despite granting a period of exclusivity, the takeover bid from Peter Kenyon and Kaminski fell through in the latter phase of 2022. In a letter to the fans, the Monaco native had said, “There has been much talk of investment in our football club recently – even takeovers – but I want to clarify that there is no ‘for sale’ sign currently hanging outside Everton Football Club. It will always be pragmatic to explore all potential investment opportunities and, as I have been transparent about, I am actively focused on completing the financing for our fantastic new stadium as well as strengthening the playing squad and that might include a search for a minority investment. That will continue. But I want to reassure all of you that Everton Football Club is not for sale.”

As per reports, there are potential buyers from the middle east who are interested in the Mersey-side club. Recently there has been a lot of change in ownership in the Premier League. Newcastle United was acquired by a consortium based in the middle east while the FSG Group officially put Liverpool for sale. Manchester United is also slated to have new owners at the helm after a potential multi-billion takeover.

In case you missed: Manchester City looking to sign star Serie A striker in exchange for Joao Cancelo: Reports

The fans have been disgruntled with Moshiri-era for a long time. The irregular spending on marquee signings, the lack of direction at the club and a series of abysmal performances saw the team fight to stay up in the previous season. In this season, things have gotten even worse for the Toffees as they found themselves on the foot of the charts with just 15 points from 19 games.

A recognized fan association, NSNOW, has staged multiple protests to get the board to resign. It told the Mirror, “We’re not happy with how the club is being run, how much money has been spent or decisions that are being made at executive level. That’s the only message we want to put across – we want change. We want a certain type of people running our football club. It’s one of the oldest clubs in the country with a proud reputation.”

Interestingly, if an American consortium takes over the club, it will increase the number of US investors in the PL to nine.